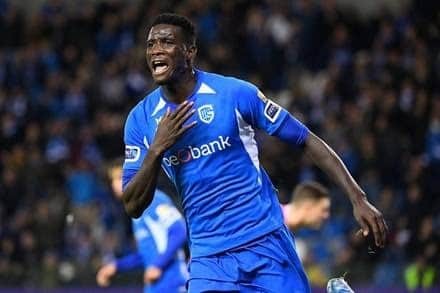 Onuachu has racked up an incredible 31 goals and three assists in 35 league matches for Genk to power the Smurfs to a top-four finish.

The ex-Midtjylland man equally found the back of the net twice in three games to help Racing triumph in the Belgian Cup.

With a scoring record that places him among the best strikers in Europe, Onuachu attracts interest from Italy, France, and Scotland.

Vandereycken is convinced that Onuachu is ready to step up from the Belgian championship to the German Bundesliga or even the English Premier League.

Talking up the physical attributes and footballing intelligence of Onuachu, the former Genk manager expects the Super Eagles man to cope well with moving to a more demanding league.

“Onuachu is a very special type of striker; you can hardly compare him with anyone,” Vandereycken told Het Nieuwsblad via VoetbalPrimeur.

“Despite his 2.01 meters, Onuachu is technically strong and fast. And he often succeeds in making the right decision has to do.”

“He will also feel that after a season in which he has already scored 33 times, it is the time to take a step higher.

“He must be able to keep up perfectly in the Bundesliga or even the Premier League, as long as he chooses the right club and trainer. Although we always have to wait and see how a body reacts to a more demanding competition.”

Onuachu has confessed his affection for English side Arsenal, but the Londoners are not known to be among the clubs considering moving for the Nigerian ace this summer.