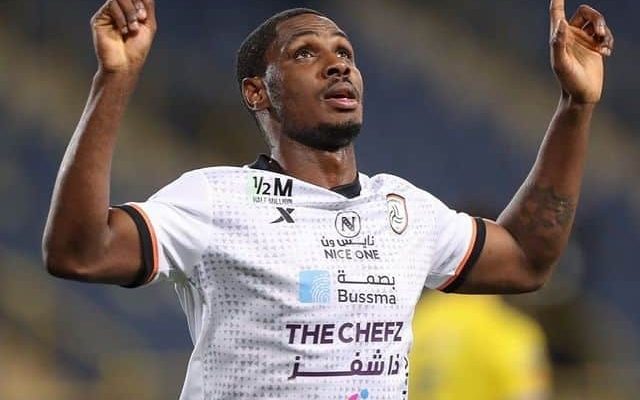 Al-Shabab had lost their last two league games to Al-Ettifaq and Al-Hilal, respectively, but they bounced back with a comprehensive win on Wednesday night to stay in touch in the title race.

Ighalo scored twice in the loss to Ettifaq, and he continued in the same vein on Wednesday night. The former Manchester United player doubled Shabab’s lead in the 41st minute after Seba had put them ahead in the 36th minute.

It’s Ighalo’s sixth league goal since joining the side in February. The 31-year-old was on the pitch for 76 minutes before going off for Turki Al-Ammar.

Badou Ndiaye pulled one back for the away side on the stroke of half-time. However, Ever Banega restored the home side’s two-goal lead from the penalty spot in the 67th minute before Cristian Guanca made it four in the 71st minute.

Banega had the chance to score a second after Shabab were awarded another penalty, but he could not convert the resulting spot-kick.

Nonetheless, Igor Lichnovsky made it a five-star performance for Carlos Inarejos men with a strike seven minutes from time.

The win helps Shabab retain their slim title hopes but are still four points behind leaders Al-Hilal with two games left to play.