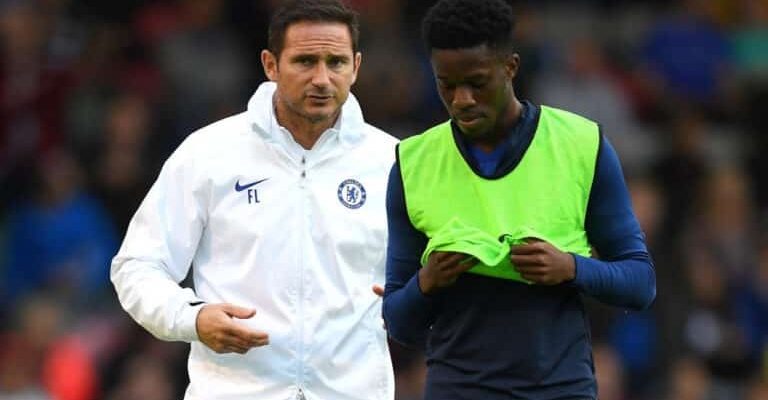 Striker Ike Ugbo won’t be part of the picture as his club Chelsea goes up against fellow English Premier League side Manchester City in the May 29th UEFA Champions League final. He spent the 2020-21 season on loan to Belgian club Cercle Brugge.

Chelsea are +310 underdogs in the odds at the top soccer betting sites to win the Champions League final. After 12 seasons with the Stamford Bridge side, it looks as though Ugbo’s days with Chelsea will soon be coming to an end.

He’s expected to be on the move to a new club during the upcoming summer transfer window. However, it looks as though it isn’t only a club side where Ugbo will soon be outfitted for a new kit.

He’s on the brink of suiting up for a new country as well. Ugbo recently took another step toward fulfilling his wish to play internationally for Nigeria’s Super Eagles.

Ugbo, 22, represented England internationally 15 times at the under-17 level, scoring five goals. He also earned five caps for England’s under-20 side, scoring twice. Ugbo played for the England Under-21s at the European Championships in Poland.

Ugbo was born in Lewisham, Greater London, but he is of Nigerian descent. Since he’s never played a senior international match for England, he is still eligible to suit up at that level for Nigeria.

In order to do so, however, he’ll require the stamp of approval for the move from all four of the British home nations soccer federations.

CHECK IT OUT:  Sarz plays the original version of Wizkid’s ‘One Dance’ on his IG Live (Video)

He’s still awaiting word on this matter from the English Football Association and Scottish FA. Neither association has yet to respond to a letter from the Nigeria Football Federation requesting permission for Ugbo to be considered for the Super Eagles.

The addition of a talented finisher such as Ugbo would be a boon for the Super Eagles. He’s just completed his finest season as a pro, scoring seventeen goals in 34 matches across all competitions for Cercle Brugge. Last season, on loan to Dutch club Roda JC, Ugbo netted 13 goals in 29 appearances.

Ugbo has been part of Chelsea’s system for 14 years. He debuted with the club’s under-10 side and turned pro in 2015 at the age of 17. The following year, Ugbo helped Chelsea win the FA Youth Trophy. Interestingly, they beat Manchester City 2-1 in the final.

A goal-scoring sensation at under-19, under-21 and EPL-2 matches for Chelsea, Ugbo has never appeared in a single match with Chelsea’s first team during his seven years under professional contract to the club.

He was sent out on loan to Barnsley of the Championship and Milton Keynes Dons of League One during the 2017-18 season. Ugbo spent the 2018-19 campaign on loan to Scunthorpe United of League One.

One English club on the way up and another on the way down have both been linked to transfer deals involving Ugbo. He still has one year remaining on his contract with Chelsea.

CHECK IT OUT:  How Can You Make Money Online With 1000 Naira?

Watford won promotion back up to the EPL and are interested in adding Ugbo to their strike force. Fulham are headed back to the Championship from the Premier League but are also reportedly seeking to add Ugbo services in order to aid their climb back into the top flight.

There are also clubs on the continent being mentioned as having an interest in pursuing the transfer of Ugbo.

Cercle Brugge also maintain an option to purchase Ugbo’s contract from Chelsea for £5million. However, the word is that Ugbo desires to move on from the club to another side.

Ugbo, who has admitted to speaking with a sports psychologist in order to help take his game to the level where he could play regularly with a top European side, acknowledged to The Athletic that he’d like to be able to settle down and find a permanent home with a club.

“My loans were lonely and I was hiding on the pitch,” Ugbo admitted of his early years adrift from Chelsea.