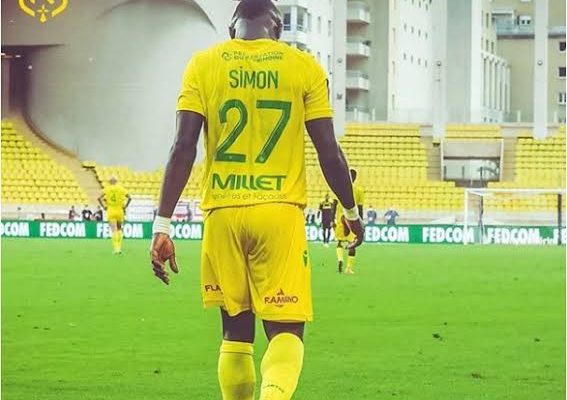 Moses Simon gave his all but it was not enough as Nantes finished in the relegation playoff spot after succumbing to a 2-1 home defeat to Montpellier in the last round of matches in the French elite division.

Terem Moffi and Samuel Kalu both heaved sighs of relief as Lorient and Girondins Bordeaux avoided relegation after posting positive results on the last day of the 2020/21 Ligue 1 season.

Moffi was also in action as Lorient secured an important 1-1 draw at Strasbourg, a result that secured the club’s top-flight status a year after gaining promotion from the Ligue 2.

Habibou Mouhamadou Diallo headed the home side in front at the Stade de la Meinau after just 18 minutes but Trevoh Chalobah equalised for the visitors ten minutes after the interval.

At the Stade Auguste Delaune, Bordeaux did well in the absence of injured Nigerian playmaker Kalu to guarantee their elite status with a fine 2-1 win over Reims.

The hosts struck first within the opening quarter of an hour through El Bilal Toure but Bordeaux turned the tie around in their favour courtesy of goals from Yacine Adli and Enock Kwateng.

Elsewhere, Lille have were crowned champions of France after beating Angers 2-1.

CHECK IT OUT:  Court Remands 9 Unemployed Over Alleged Robberies At Gunpoint