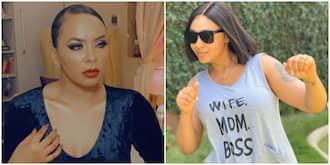 Reality TV star Tboss’ sister Wendy Idowu has taken to her social media page to advise actress Rosy Meurer to stop being childish and focus on her baby.

It all started when Rosy made a ‘demeaning’ post about women online and she got dragged for it. She later made another post to defend herself. Unluckily for her, the post got her husband dragged too.

Later, Tonto Dikeh made a post about ex-partners, and Rosy replied to her.

Rosy’s controversial attitude got Nigerians talking on social media as many noted that she is just fighting herself. Taking to her Instagram page, Wendy decided to advise the new mother.

Noting that nobody is fighting the actress over a man, Wendy asked Rosy why she is focusing on people who don’t care when she just had a baby.

Tboss’ sister told the actress to focus on what she would teach her kids as hate and childish games are not healthy for her.

Read her full statement below: 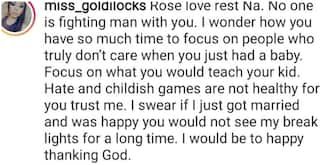 The post No One Is Fighting Man With You: Tboss’ Sister Advises Rosy Meurer to Stop the Childish Games appeared first on .

CHECK IT OUT:  BBNaija: Fani-Kayode Blasts MURIC For Demanding A Ban On The Reality TV Show