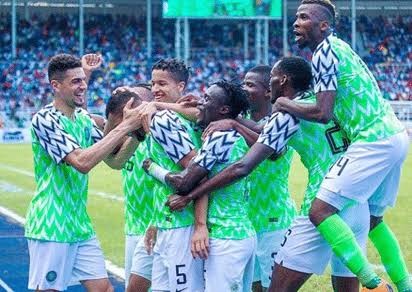 The three-time African champions were hoping to bounce back in the second of their doubleheader friendly game against the Indomitable Lions.

Nigeria failed in its revenge mission against Cameroon as both sides played out a drab 0-0 draw at the Wiener Neustadt Stadion in Austria on Tuesday evening.

Gernot Rohr’s men had lost 1-0 to the same opponent last Friday and were seeking revenge going into Tuesday encounter.

The German tactician made two changes to the side that started on Friday with Ahmed Musa and Valentine Ozornwafor coming in for Oghenekaro Etebo and William Troost Ekong respectively.

However, it was a lethargic display from the Super Eagles, with their play lacking chemistry. They struggled creatively and were lucky not to be behind in the first half as Cameroon’s goal was ruled out for offside.

The Super Eagles created the better chances last Friday, but the only time they threatened on Tuesday evening was when Alex Iwobi was presented with a good opportunity but fluffed his lines.

The result leaves Rohr with just five wins in 19 friendly games since he took over as the team’s coach. Next up for the Super Eagles is another friendly game against Mexico at the Los Angeles Coliseum on July 4.