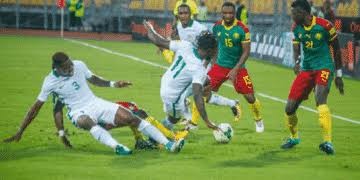 Nigeria were held to a goalless draw by Cameroon at the Wiener Neustadt Stadion, Wiener Neustadt, Austria, in the second of their two-match international friendly series.

The Lions were content to pick a draw after winning the first game 1-0 last Friday via Andre Anguissa’s 37th-minute goal. Nigeria’s hopes of a payback did not materialise as they chased a goal all to no avail.

Nigeria coach Gernot Rohr made only two changes to his starting lineup as he chose Ahmed Musa ahead of Oghenekaro Etebo and Valentine Ozornwafor replaced the injured William Ekong in the centre of defence.

Kelechi Iheanacho and Paul Onuachu kept their place from the last game and Jamilu Collins, who was thought to be out of the encounter, recovered in good time from the knock he picked up last time to start. However, he would be replaced in the 67th minute by Abraham Marcus.

Lorient striker, Terem Moffi, won his second cap for the team as he once again came on in the second half to try to score for the Eagles.

Cameroon started Bayern Munich striker Eric Maxim Choupo Moting after he only made the second half of the last game due to back problems.

Both teams will now reconvene in September for their respective 2022 FIFA World Cup qualifying matches having learned new things about their squads during these two friendly games.

CHECK IT OUT:  Nigeria to convince Manchester City prodigy to switch allegiance from Germany