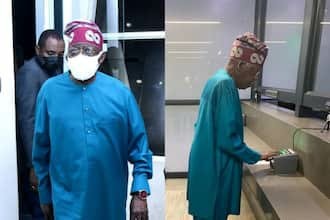 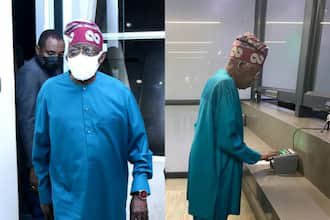 Following the rumour about his death, the national leader of the All Progressives Congress (APC), Asiwaju Bola Tinubu, arrived in Lagos from Dubai on the night of Tuesday, June 15.

PM News reports that social media was awash with rumours that Tinubu was dead, but his media office denied the reports, saying that the former governor would soon arrive in the country.

It was gathered that Tinubu arrived Lagos hale and hearty, putting those wishing him dead to shame.

According to the report, the rumours of Tinubu’s death might have been fuelled by the domestic accident he reportedly had in his bathroom two weeks ago.

Tinubu was said to have fallen on his two knees and sustained injuries, which necessitated his travelling to Dubai for medical attention.

The post I Am Not Dead, Tinubu Declares As He Arrives Nigeria From Dubai appeared first on .

CHECK IT OUT:  Hired Killer Sent To Kill Pastor Goes Naked And Sleeps Off On Duty (Photos)