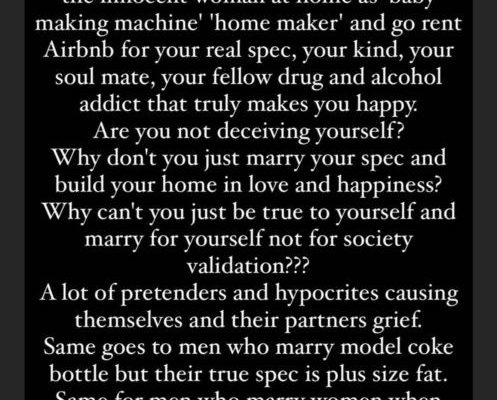 Actress Etinosa Idemudia has taken on married guys who cheat, questioning why they don’t just marry their spec once and for all instead of marrying for the approval of the community.

Etinosa Idemudia shared her thoughts on married men who cheat, saying that instead of marrying society’s spec, they should marry their spec and turn them into baby-making machines before going out to cheat with their spec and do their crazy things together.

In her post, she wrote, “After you marry ‘society spec’ ‘God fearing’ to please family and society you will keep the innocent woman at home as ‘baby making machine’ ‘home maker’ and go rent Airbnb for your real spec, your kind, your soul mate, your fellow drug and alcohol addict that truly makes you happy.

”Are you not deceiving yourself? Why don’t you just marry your spec and build your home in love and happiness? Why can’t you just be true to yourself and marry for yourself not for society
validation??? Alot of pretenders and hypocrites causing themselves and their partners grief. 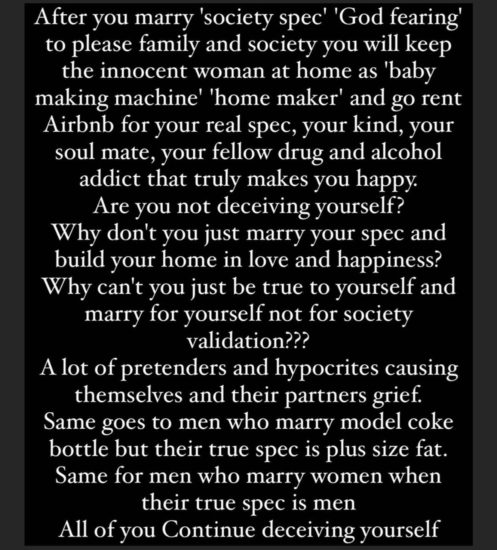 CHECK IT OUT:  “Makinde Has Not Fulfilled Promises He Made To Me” – Senator Lanleyin Laments