According to VanguardNews, an unconfirmed report that late Engr. Fidelis Kings Nweze has risen from the dead has confused Ebonyians.

On Thursday, June 24, many sympathisers and supporters of the deceased were observed jubilating over the late Commissioner for Infrastructure and Concession and former Commissioner for Works and Transport’s return to life.

The road leading to his house was blocked as a large number of people flocked to the spot to verify the accuracy of the claim.

On Tuesday, June 22, Governor David Umahi revealed the commissioner’s untimely demise. He was Umahi’s younger brother, buddy, and destiny helper, according to Umahi.

Engr. Nweze was said to have been in an accident on his way to Enugu on Saturday, June 19. Gov. Umahi then announced the 23rd of June a public holiday in Nweze’s honor. 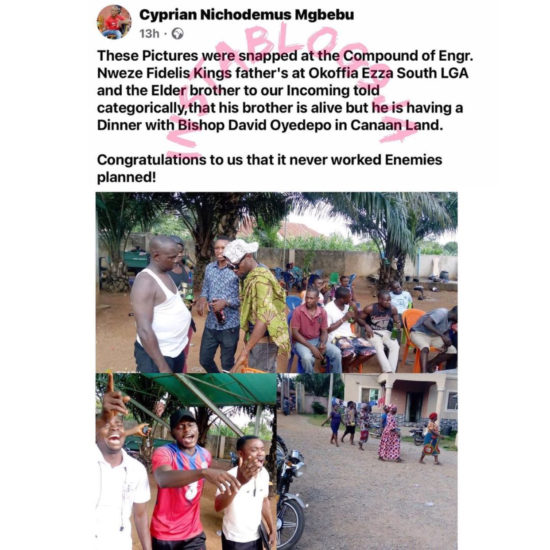 The post Massive Jubilation As Late Ebonyi Commissioner Allegedly “Rises From The Dead” appeared first on .