Home
NaijaCover
“I Don’t Want To Die,” Bobrisky Cries Out After Plastic Surgery

Popular Nigerian crossdresser, Bobrisky has taken to his Instagram page to reveal his experience after undergoing a plastic surgery to increase his butts.

The crossdresser also confessed on the pains he went through while doing the butt enlargement surgery.

Recall that some weeks ago, Bobrisky underwent a surgery to lift his buttocks. After doing the surgery, he also updated his fans on his Instagram page during his healing process .

Bobrisky, however, took to his page today to advise anyone interested in going for plastic surgery.

”Anything that concern liposuction I don commot my hand for there. D pain na die!!! And some of you girls are going two times haaaaa make una fear God.

The moment d anesthesia worn out from my body after the surgery i nearly die. The whole hospital no sleep. Even pain killer no reach me. I don commot my hand for anything called lipo. I never wan die now.”

Reacting to this, a fan with username manarisia_1 wrote, “Stop scaring me Bob.”

In reply, Bobrisky said, “my love is so painful don’t allow anyone lie to you o.” 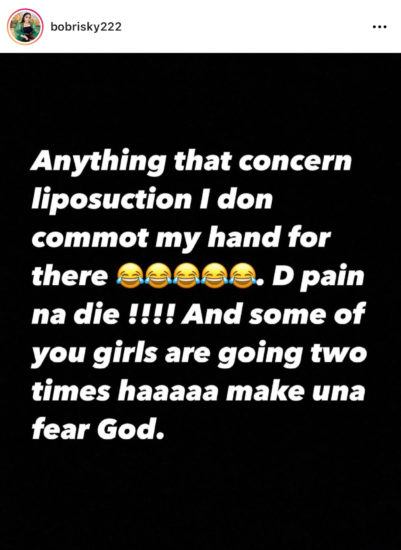 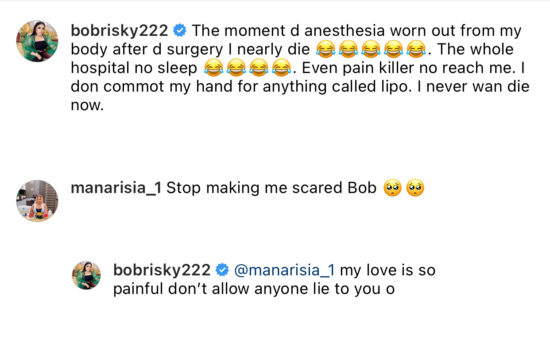 The post “I Don’t Want To Die,” Bobrisky Cries Out After Plastic Surgery appeared first on .

CHECK IT OUT:  Why it’s better to have a child with someone you don’t love – Yvonne Nelson spills
Share
Tweet
Email
Prev Article
Next Article

Loading... The Nigerian Electricity Regulatory Commission (NERC) has directed the …