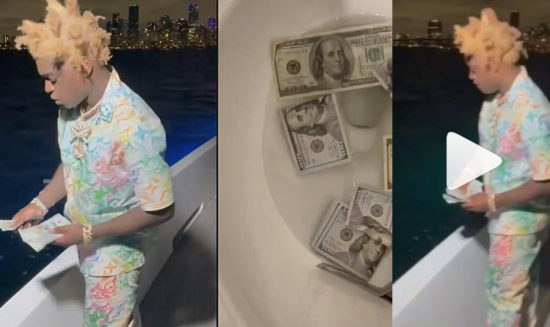 Kodak Black has been lamenting on social media lately and now, he’s casually tossing away hundreds, if not thousands, of dollars into the abyss.

Late Tuesday night (June 29), Kodak shared a video to his Instagram page of himself throwing a stack of $100 bills off of a boat. “I Broke You Off When Dem Fuck Niggas Wouldn’t Give You A Dime !!! I Ain’t Owe You Shit Nigga I Just Wanted To See You Shine !!! Yeen Never Gave Me Shit Nigga I Had My Own Grind !!!!,” he captioned the post.

The post Kodak Black Throws About $100k Into The Ocean In Lavish Showoff Of Wealth (Video) appeared first on .

CHECK IT OUT:  Fan slams Tacha for hailing Wizkid with Davido’s tattoo on her chest