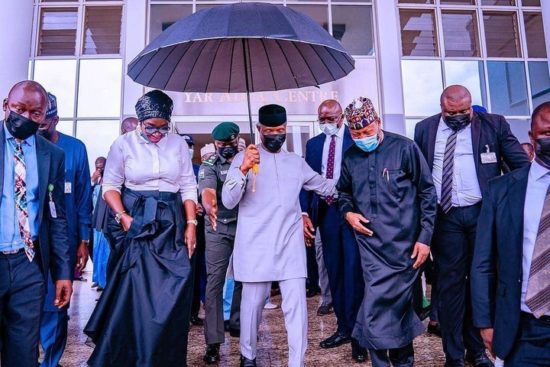 Vice President Yemi Osinbajo has been showered with encomiums by Nigerians on social media after one of his pictures went viral In a photo that is now a centre of social media discussion, the VP was seen holding an umbrella to cover himself from the rain and two others Showing humility beyond words, the VP held the umbrella despite his security aides and other subjects present in the picture.

Despite the grandeur and glamour that come with his powerful seat, Vice President Osinbajo is demonstrating a praiseworthy example of humility that is rare in the Nigerian political panorama. The VP recently rode into the heart of many Nigerians after he was sighted holding an umbrella by himself in what appears to be in the rain.

The picture was taken at the Umar Musa Yar’adua Centre in Abuja by VP’s official photographer, Tolani Alli.

The poster boy of the presidency

VP Osinbajo is not just the second most powerful man in Africa’s most populous nation, he has been praised as the strong pillar holding the presidency of Muhammadu Buhari and All Progressives Congress (APC)-led administration. The Ogun state born pastor is a Senior Advocate of Nigeria (SAN) and a professor of law, having lectured at the University of Lagos (UNILAG), among other universities. Osinbajo is a former attorney and commissioner of justice in Lagos state– a position he held under former governor Bola Ahmed Tinubu who is now APC national leader.

Nigerians react to the viral picture Nigerians who are enamoured of Osinbajo’s humility have showered him with praise, with a number of commenters saying he deserves the biggest seat in the country come 2023.

Babarinde Tope comments: “This is a kind of a leader I’m praying for.”

CHECK IT OUT:  APC plans to be in power for another 32 years- Governor Buni

The post Nigerians Hail Osinbajo As He Holds Umbrella To Cover Himself, 2 Others (Photo) appeared first on .