A Nigerian man identified as Oba has taken to Twitter reveal why Mike Adenuga’s mother’s burial remains the best.

“No burial can match up to Mike Adenuga mother’s burial sha. First, they shared cows to every street in ljebu-igbo. I mean every street had one cow each. For a whole week, there was meat every where you stepped to in ljebu-igbo. On the day of the burial itself, there was asun stand for mo gbo mo ya, majorly 00U students inside Abusi Edumare. They packed trucks filled with cartons of beer. Trucks o. You take as much crates as you can. No restrictions to how many people can attend.”

“Gbenga Daniel tarred Oru/ljebu-igbo road and installed atreet lights for the burial. And they had different musicians performing each day for the whole week. KSA, Yinka Ayefele etc. I’ve not seen anything like that before. This was in 2005 or thereabout.”

“Omo, we went home with crates of alcohol. Earlier in the week, they came to share cow parts for us at home as our share of the meat meant for the street. It was a total shut down for one week. Obasanjo and almost all the governors attended.

“Madness. Madness that I can never forget. When Mike Adenuga’s daughter came to spray KSA on the field, you need to see her entourage. By entourage, I mean her friends that are following and shielding her. Padi mi, money is good in this life.

“They had like four or five different groups of people attending the party at the same time. The one inside the compound is for the president and governors. State legislators were on the field. Families camped elsewhere or the field. Different groups. Then there is the open one.

“Allahu! And you can’t access the different groups if you don’t belong there despite all of them happening in the same place. Omo! That was a one time event in this life. Money was spent.” 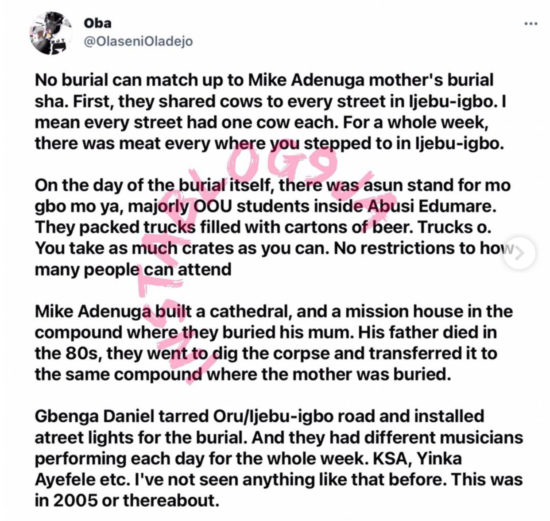 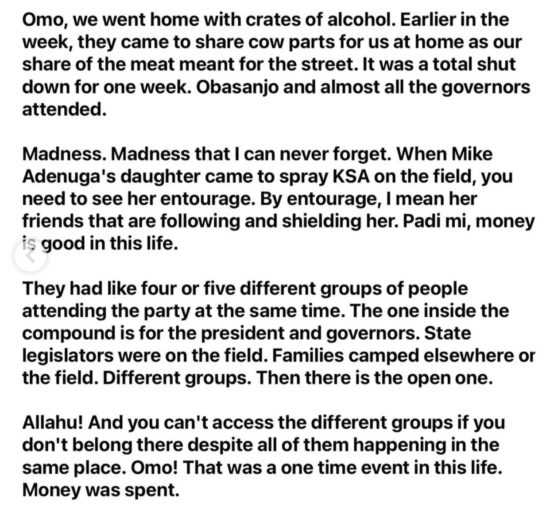 CHECK IT OUT:  Nnamdi Kanu Reacts To Leaked Intimate Video Of Him And His Wife
(Visited 1 times, 1 visits today)