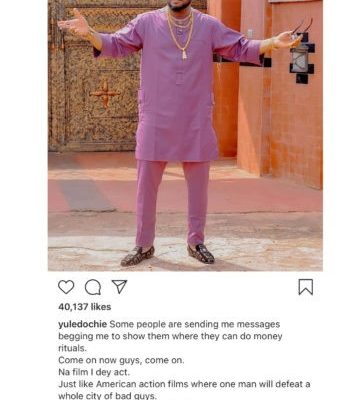 Yul Edochie, a well-known Nigerian actor and director, has stated that he is merely a very excellent actor and not a ritualist.

His statement arises from the fact that he rose to fame by portraying ritualists in movies.

People frequently write him messages asking how they can do money rituals, but the actor responded in an Instagram post that he is a very good actor and not a ritualist.

The son of Nollywood’s living legend, Pete Edochie, said, “Some people are sending me messages begging me to show them where they can do money rituals. Come on now guys, come on. Na film I dey act.

“Just like American action films where one man will defeat a whole city of bad guys. Na storyline be that, e no dey happen. Is it now a crime to be a good actor? Make I no chop??? Na wa for una oo.” 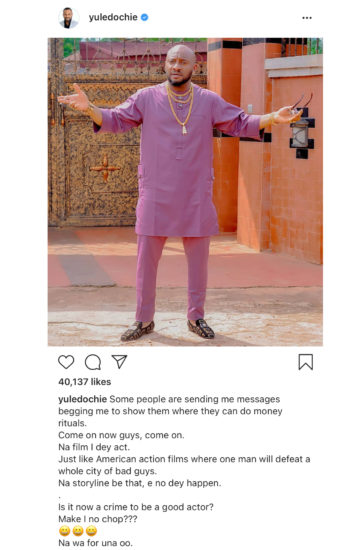 To prove his point, the actor shared a screenshot of a message from one of his fans.

In the direct message sent to him, the fan wrote, “Afa bro, where e dey happen. Give me location I’m ready for sacrifice abeg. I message KOK, he never answer me. I will keep everything secrets. I promise. Just take me to baba make I run my own sharp.”

Taking to the caption section, Edochie noted that he gets such messages daily.

He wrote, “This is just one of the many messages I receive daily. Some are even more serious than this. Some say I no wan cut soap for boys. Which soap abeg??? Naija oo. Wahala everywhere.I love this country.”

CHECK IT OUT:  Nigerians on Twitter rebuked those sexualizing Yul Edochie’s 15-Year-Old Daughter 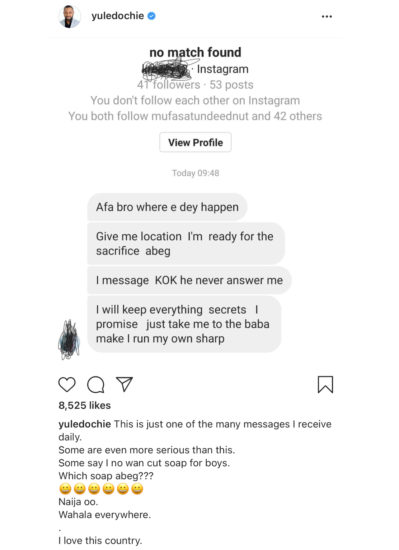 The thespian is one of the Nigerian actors known for his roles as an occult member.

The post Nollywood Actor, Yul Edochie Opens Up On ‘Being A Ritualist’ appeared first on .