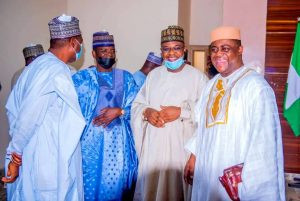 Femi Fani-Kayode, a fierce Buhari critic, has reacted to criticisms aimed at his presence at the wedding ceremony of Yusuf Buhari on Friday.

Femi announced via his Facebook page that he arrived in Kano on Thursday to attend the ceremony.

The post received backlash from many who knew him as a fierce critic of Buhari. According to them, he was one of the many that they least expected to attend the ceremony.

Buba Galadima with Ahmad Lawan, GEJ with PMB, GEJ with VP & Atiku with PMB. Politics is about bridge-building regardless of your differences. It is not war. You can be friends with ur political adversary& still disagree. It’s called politics without bitterness & being civilised.