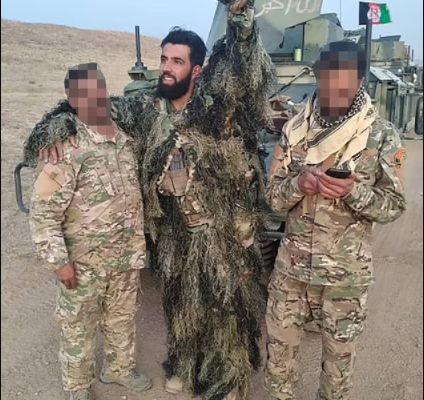 An Afghan sniper who worked alongside British Special Forces was executed in front of his family by the Taliban.

According to Mail Online, Noor was traced to his sister’s home on the edge of the Afghan capital Kabul and shot three times in the chest and again as he lay on the ground by two gunmen on Monday, September 13.

He had been a member of a British-trained Afghan unit known as CF333, many of whom were rescued in the airlift from Kabul airport that followed the Taliban takeover.

The murder prompted shock and anger from members of the British military, with former Colonel Ash Alexander-Cooper, OBE, a commander of specialist operations with the SAS, tweeting:

‘For those leaders still unsure, this is not a game, ‘N’ was executed by the Taliban in cold blood just a few hours ago. His crime ? Years of loyal and professional service, mentored by British units.

‘There is no amnesty. Abandoned by us, this murder will not be the last.’
Noor is said to have been shot dead while his wife and five children, all under the age of nine – the youngest just ten days old – were at the entrance of the house.

‘This is the reality of the “new” Taliban,’ Mr Alexander-Cooper said. ‘Talk of inclusivity, diversity and amnesty is a joke and some are falling for it. Wake up.’

Noor’s friend, Rafi Hottak, a former frontline interpreter said: ‘Noor had been threatened many times and feared for his life. This is the reality of what is happening to those who supported the British and her allies.’