Very soon the truth will be out for all to see — 2Face’s first babymama breaks silence - NaijaCover.Com
Skip to content 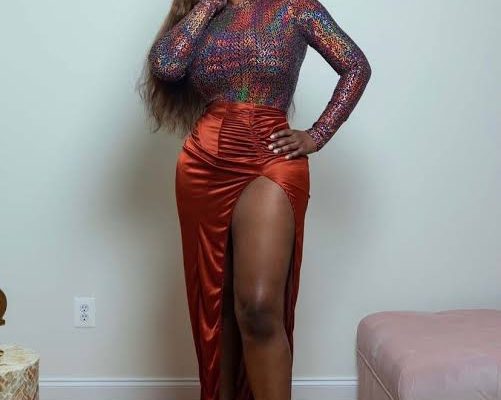 Pero Adeniyi, the first baby mama of legendary singer and songwriter, 2Face Idibia has finally reacted to the infidelity allegation leveled against her by the singer’s wife, Annie Idibia.

Annie had raised dusts when she accused Tuface of spending the night with Pero.

She had called out the musician on social media and the issue later degenerated into a crisis between her siblings and those of Tuface.

The musician had sneaked to the US in the heat of the crisis but Senator Florence Ita Giwa later reunited Annie and Tuface.

However, the drama took a new turn after Pero flew in to Abuja from her US base.

In a video, which went viral, some ladies were seen referring to Pero as Tuface’s first wife and “unshakable first lady”.

There were unconfirmed reports that Tuface was in Abuja around the time Pero visited the nation’s capital.

Pero who has been quiet ever since the drama started has now broken silence.

Reacting to the drama via a post on her official Instagram timeline, Pero Adeniyi noted that the person who started the lie knows the truth.

She wrote on her timeline:

You are asking me to speak, If I told you my truth would you believe? Would you not poke holes in it?

My truth is special to me, those that know me know the truth, that is all that matters. I will continue to guard it. Even the liar that started this madness knows the truth but needs the lie for relevance. Very soon, the truth will be out for all to see clearly, without a doubt, noone is invincible, so please continue to enjoy the lies, that is what you all thirst for anyway. Insults and dragging are yet to kill a person, no be today una don dey comment una rubbish, continue to drag like small gen, when hand pain una, una go stop. #unbothered

CHECK IT OUT:  Davido And Wande Coal Cooking New Music In The Studio 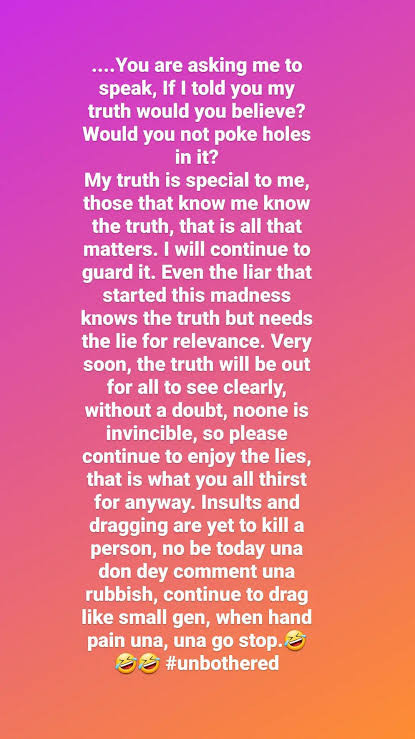