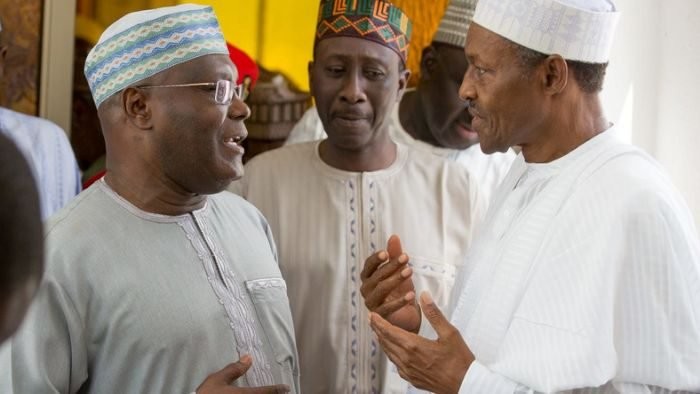 The Presidential Election Petitions Tribunal has adjourned a petition filed by the Peoples Democratic Party (PDP) and its presidential candidate, Atiku Abubakar, against the victory of President Muhammadu Buhari in the 2019 presidential election.

The pre-hearing session of the petition commenced amid tight security at the Court of Appeal in Abuja on Wednesday, May 15, 2019.

Before the panel could commence proceedings, PDP’s counsel, Levi Uzoukwu, requested to address the five-member Justice Zainab Bulkachuwa-led tribunal over an application.

The panel met outside the courtroom with two senior lawyers representing the PDP, two representing Buhari’s All Progressives Congress (APC) and one representing the Independent National Electoral Committee (INEC). APC and INEC are both respondents in the petition alongside Buhari.

After the meeting, Justice Bulkachuwa revealed that the PDP and Atiku asked her to recuse herself from the panel. She then directed the petitioners’ legal team to file a formal application so that the issue can be treated openly.

She adjourned till May 22 for the hearing of the petitioners’ application which Uzoukwu said will be filed on Thursday, May 16. The PDP had previously written Bulkachuwa to request that the judge recuse herself from the panel because she’s the wife of Adamu Bulkachuwa who was recently elected the Bauchi North Senator on the platform of the APC.

In a letter dated May 8, the main opposition party said it’s worrying that she decided to appoint herself the chairman of the panel despite that members of her family, especially her husband, are active members of the APC which is a respondent in the suit.

CHECK IT OUT:  Fabregas Recalls How Kanu Reacted On His First Arsenal Training

The party asked her to recuse herself because it would be impossible to convince anyone that she’d never discuss the petition, throughout the trial, with her husband who is interested in its outcome. “This is so because justice must not only be done but must be manifestly seen to be done,” the party said.

The petition was signed by party chairman, Uche Secondus, who was present at Wednesday’s hearing, and its national secretary, Senator Umaru Tsauri.

However, in a petition filed before the tribunal, Atiku claimed that he actually won the election with 1.6 million more votes than Buhari according to an internal compilation of results he claimed was obtained from INEC’s server.

According to the result obtained from the INEC server as claimed by Atiku in his petition, the former vice president actually scored 18,356,732 votes while Buhari scored 16,741,430 votes. This does not include results from Rivers State which had allegedly not been transmitted at the time Atiku claims the data was captured.

While filing its response before the tribunal on April 11, INEC accused Atiku and the PDP of producing fake election results to prove their case.

“INEC specifically denies the existence of electronic transmission of results and it is unknown to the Electoral Act 2010 (as amended),” the commission noted in its response.

Atiku also accused Buhari of not possessing the educational qualification to contest, alleging that he submitted false academic documents to INEC to aid his qualification.

CHECK IT OUT:  Wizkid is the only man I can spread my legs for – Nigerian Lady

In their counter to Atiku’s petition, Buhari and the APC said the former vice president is not qualified to contest for the presidency because he was born in Adamawa State at a time when it was Northern Cameroon before it voted during a 1961 referendum to align with Nigeria.