Sack Us If We Fail, Commissioners, Advisers Tells Obaseki - NaijaCover.Com
Skip to content 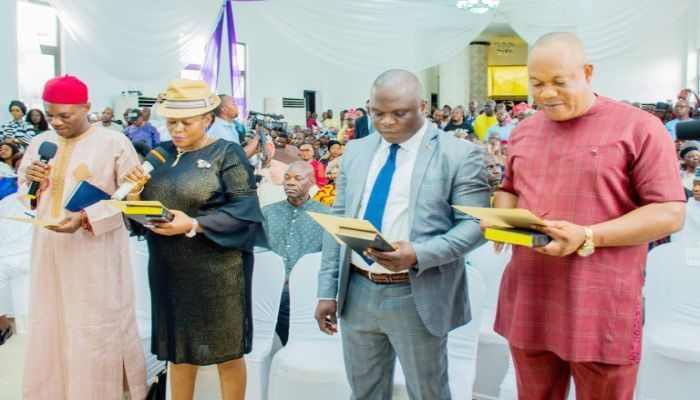 Six Commissioners and five Special Advisers were on Wednesday sworn-in by the Edo State Governor, Mr. Godwin Obaseki, with a charge to the appointees to work for the betterment of the state and people.

Speaking during the swearing-in of the commissioners and special advisers at Government House, Benin City, the governor described their appointment as a call to service.

“You will be put under pressure but resist it, knowing that you are called to serve and if you do well, your family, friends and the state stand to benefit. Politicians are just agents between the people and public good.

“I want to admonish all of you because you may end up worse off financially, like me, when you leave office. But a good name is better.”

The governor said Edo State is marching towards greater heights, moreso, if everyone agrees to diligently work for the progress of the state and people. He noted,

“The real challenge in Edo State is our meagre resources, which they are all struggling to share in the name of politics. It is so small. In global terms, the total budget of the four (4) million people in Edo is less than $400 million and that is less than the budget of the New York Police.”

“This is an economy that can generate $4 billion a year but when we decide to eat the yam seeds it will become difficult to achieve.

“Today you are joining me to make Edo State a premium state in Nigeria where we are re-defining and re-enacting public service. Politics is geared towards service to the people,”

CHECK IT OUT:  UNBELIEVABLE!! Someone Shit Inside The Pool Full Of People In Ghana (Watch Video)

Speaking on behalf of the other appointees, Hon. Damian Lawani, thanked the governor for the opportunity given to them to contribute their quota to the development of Edo State.

He pledged their loyalty to the service of the people of Edo State and called on the governor to sack any one of them if found wanting in the discharge of their duty.