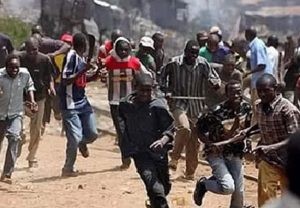 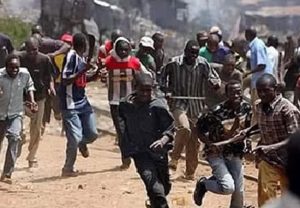 Reports reaching Naija News reveals that Ogun State Police Command has arrested four persons and recovered some weapons following the chaos that leads to the death of a Hausa man.

It was reported that some group of Yoruba and Hausa Traders engaged in a fight at Lafenwa Market, a popular market in Abeokuta which resulted to the arrest of the 4 individuals after stabbing two others with a knife.

Reacting to the fight, the state Police Public Relations Officer, Abimbola Oyeyemi, noted that the command had seized some fighting items, which include sharp objects from the people arrested at the scene of the fight.

Naija News, however, confirmed that the clash between the two Nigerian speaking tribes records no loss of life

This media platform understands that the violence erupted after a Hausa trader man was allegedly hacked down by some gangs suspected to be Yoruba.

Speaking further about the clash, Abimbola said, “The violence broke out when some Hausa petty traders refused to pay the mandatory daily market levy to the market miscreants.”

“There is no death recorded. Two people were injured.”

He added that those who are involved in the clash will face the law and will be dealt with accordingly.

Meanwhile, Naija News had reported earlier that the Ogun State Executive Council has approved the passage of the Amotekun Bill and has been signed into law by the State Governor.