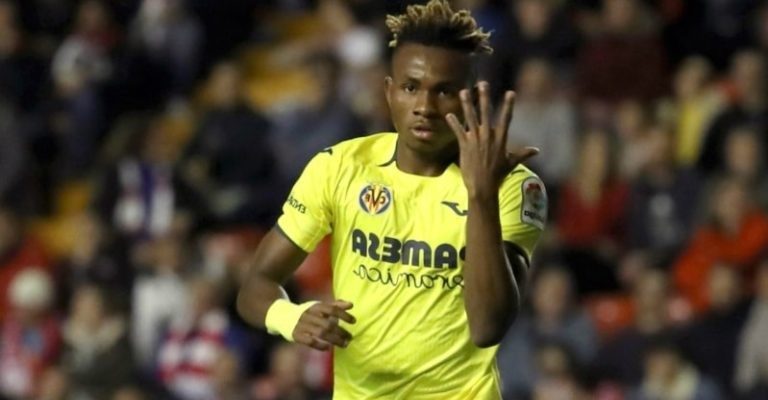 Just a few days after playing an important role in Villarreal’s victory at Celta Vigo, Samuel Chukwueze was at it again as he helped the Yellow Submarines to another vital win over Real Mallorca at the El-Madrigal stadium on Tuesday evening.

The Nigerian international is yet to reach his debut season heights, but he’s been brilliant in the last two games since La Liga returned from its three months break due to the coronavirus.

Chukwueze was brought on in Villarreal’s clash against Celta Vigo last weekend, and he had a hand in Manuel Manuel Trigueros late winner.

With his impressive cameo, Javier Calleja handed the 21-year-old a start on Tuesday night, and he did not disappoint as he set up Carlos Bacca’s opener.

Picking up the ball on the right, Chukwueze beat a host of Mallorca’s defenders before squaring for Bacca who slotted into an open net.

@Eng_Villarreal‘s opener was all about one man…

Following Bacca’s opener in the 16th minute, the two sides struggled to create any real chance again, and Villarreal went into the break with the lead.

The second half kicked off with Villarreal on the front foot, and they could’ve doubled their lead five minutes into the restart through Chukwueze.

The Nigerian was presented with a chance to score a goal his performance deserved, but his half volley was just inches off the bar.

Javier Calleja’s side continued to push for the second goal, but Mallorca’s defence repelled everything thrown at them.

CHECK IT OUT:  Excitement As Veteran Actor, Baba Suwe, Gets Discharged From LUTH

The away side also had chances of their own and came close to securing a precious point, but Baba’s effort from distance could only hit the crossbar.

Nonetheless, despite the late scare, Villarreal held on for a vital win. The victory puts the home side in seventh place with 44 points, three points behind Real Sociedad in fourth place, although The Whites and Blues have a game in hand.