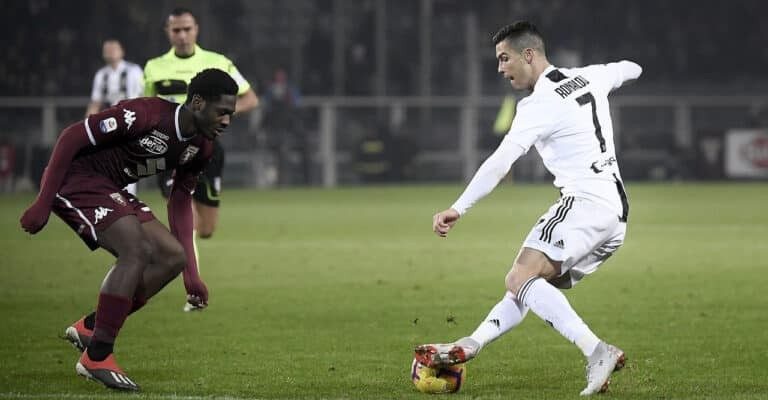 Super Eagles defender Ola Aina was on the field for 84 minutes, but Cristiano Ronaldo and co were brilliant as Juventus saw off Torino in the Turin Derby.

With the title race heating up, Juventus knew they couldn’t afford to relax as Lazio are ready to capitalise. The Old Lady imposed their dominance straight from the kick-off, as they went ahead inside the opening three minutes through another Paulo Dybala strike.

Receiving a ball from Rodrigo Bentancur, Dybala beat two defenders easily before firing a left-footed finish into the net.

Juan Cuadrado would then double Juventus lead in the 29th minute when he fired in a low shot past Sirigu.

Torino were handed a lifeline in the added minute of the first half when Mathijs De Ligt was penalised for a handball inside the box.

Andrea Belloti converted the resulting spot-kick firing into the middle with Gianluigi Buffon, making his 648th Serie A appearance, going the wrong way.

Torino came out firing following the restart, but for all their possession, it was Juve extended their lead through a brilliant Cristiano Ronaldo free-kick.

Another incredible goal by @Cristiano.
He’s just become the first Juventus player to score 25+ league goals in a single season since 1961. He’s 35! https://t.co/DzLS5P8u3h

After Ola Aina was adjudged to have blocked a shot with his hand on the edge of the box, Ronaldo then fired the resulting free-kick over the Torino wall and left Sirigu grasping at thin air.

Maurizio Sarri’s side then added a fourth three minutes from time through a Koffi Djidji’s own goal. The win puts Juventus seven points clear of Lazio who play AC Milan later in the day.

For Aina and his Torino side, they stay in 15th place with just 31 points from 30 games.