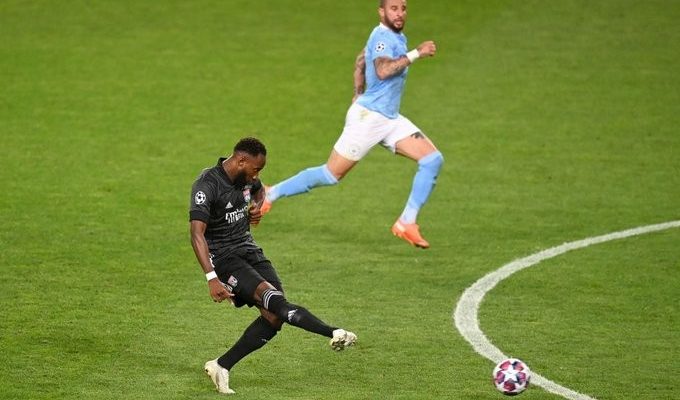 Manchester City search for the holy grail continued after Lyon flipped the script by recording a stunning victory in the Champions League quarter-final clash between the two sides at the Estadio Jose Alvalade in Lisbon.

City were clear favourites to progress going into the game, and they dominated possession from the start.

However, for all of their possession, it was Rudi Garcia’s men that drew the first blood in the 24th minute. Pep Guardiola sprung a surprise by playing three at the back, but it proved to be their Achilles heel as Lyon exploited the space behind the three centre backs.

The French side opened the scoring after Ederson’s attempt to clear a long ball played into the path of Karl Toko Ekambi fell to Maxwel Cornet, who fired a left-footed curler into the near post.

It was against the run of play but Lyon players won’t care. City tried to get back into the match and should’ve drawn level when a Kevin De Bruyne perfect pass found Raheem Sterling, but the England international was closed down before he could take a shot.

CHECK IT OUT:  “Hospital Detaining My Wife, Twin Babies Over N3million” – Man Cries Out In Delta