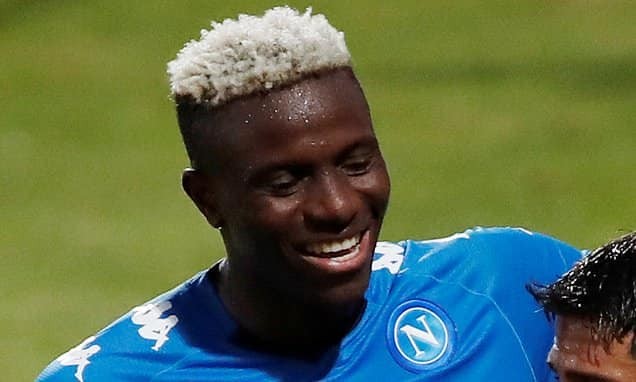 The Nigerian goalscoring wonder is tipped to be the next big star in Naples, and the son of Napoli’s greatest hero shares the same optimism

Diego Armando Maradona Junior, the son of Argentina and Napoli great, Diego Maradona, has hailed Victor Osimhen has a great prospect with a great room for improvement.

Osimhen became Napoli’s most expensive signing in history, after completing an €81 million deal from Lille in July, amidst links to some of the biggest clubs in England and Spain.

The Nigeria international has since delivered a taste of what the Napoli fans are to witness in the fast-approaching Serie A season.

Maradona was the last superstar to see his goals power Napoli to Serie A glory, and the son of that Argentine legend is convinced that Osimhen also can rack up the goals for the Blues.

Despite expressing concerns about the Nigerian’s link-up play, Maradona Jr. tips the 21-year-old to enjoy a fantastic debut season in the Italian top-flight.

“Osimhen is a forward with a great prospect, he has hallucinating room for improvement,” Maradona Jr. wrote in his column in the Repubblica via gonfialarete.com.

“If put in the right conditions, he can become a 30-goal striker. He’s just 21. I have expressed some doubts about his construction phase when it comes to tying up the game.

CHECK IT OUT:  FG Lodges Complaint Over Live Sex On BBNaija With NBC (Read Full Details)

“He must be put in a position to kick many times on goal. Once he can be wrong, not the second (time).”

Osimhen became the toast of Europe after smashing in 18 goals in all competitions for Lille last term, a replica of the 20 he netted during his loan spell with Sporting Charleroi in 2018-19.