It Will Be Difficult For Him To Play” – Super Eagles Star Urged To Seek New Club - NaijaCover.Com
Skip to content 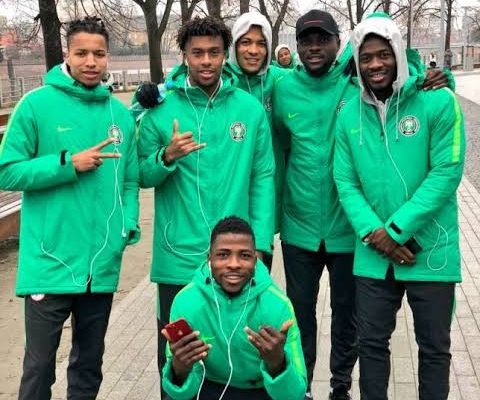 Just twelve months into his five-year contract with the Toffees, former Arsenal man Alexander Iwobi is no longer part of the plans at Goodison Park

Former Nigeria international defender, Ifeanyi Udeze, has charged Alex Iwobi to dump Everton and join another club before the transfer window slam shut in the next couple of weeks.

Iwobi’s signing last summer caused quite a bit of splash among Everton fans who were excited that the Nigerian playmaker would lift the side to greater heights.

But the Toffees struggled throughout the campaign – even romancing with relegation at some point – with Iwobi contributing just one goal all season.

Everton boss Carlo Ancelotti has been active in the transfer market to boost his options, with the former AC Milan manager recruiting the trio of Real Madrid’s James Rodriguez, Napoli’s Allan, and Watford’s Abdoulaye Doucoure.

All the three new signings made their debut at the weekend when Everton stunned Jose Mourinho’s Tottenham in a 1-0 away win.

Surprisingly, Iwobi was left out of the squad altogether, and Udeze has warned that a terrible campaign awaits the Super Eagles midfielder if he doesn’t jump ship at once.

“I think Iwobi should look for another club, especially with James Rodriguez signed, it will be difficult for him to play,” Udeze said on Brila FM as per Complete Sports.

“Imagine against Tottenham he did not make the bench and even the squad. So for me, he should start looking for another club.

“It’s painful for me, but as it is, I think the best thing is for him to go elsewhere.”

Iwobi, 24, joined Arsenal aged just eight and spent the next 15 years with the Gunners before he was sold last year for an initial fee of £28 million.