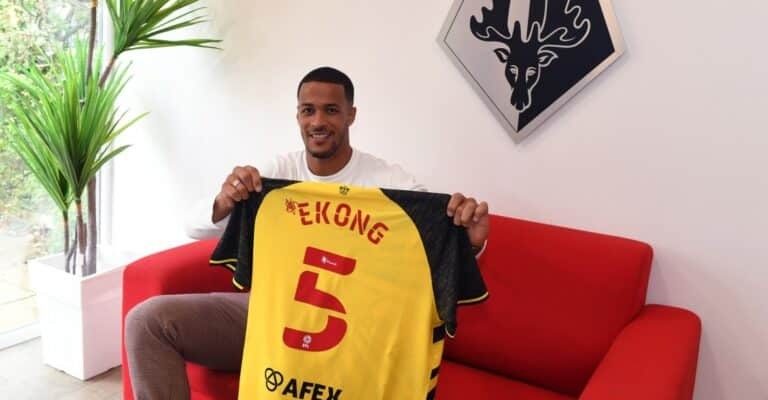 It has been a busy summer transfer window for some Nigerian players with William Troost-Ekong the latest name to switch clubs.

The Super Eagles assistant captain joined Watford from Udinese on a five-year deal that was announced last Tuesday.

Aside from Ekong, the likes of Chidozie Awaziem, Zaidu Sanusi, Chidera Ejuke and Cyriel Dessers all switched clubs.

Awaziem joined Boavista from Porto on a loan deal with an option to sign permanently. Sanusi, meanwhile, signed for the Portuguese champions from Santa Clara.

Two of Nigeria’s best players were in the Eredivisie last season, but both Ejuke and Dessers are no longer in the Dutch top-flight with the latter moving to Genk while Ejuke signed for CSKA Moscow.

However, while it’s good to see Nigerian stars on the move this summer, it also raises a question on if the players are as good as fans think they are.

The Super Eagles are ranked third in Africa, but just a few of the players play regularly in Europe’s top five leagues.

As stated earlier, Ekong left the highly-rated Italian Serie A for England’s second division- which is a massive downgrade.

The 26-year-old is Nigeria’s best centre back, but it is worrying when a team’s best defender leaves a top league like the Serie A for the Championship.

Although the Pozzo relationship between Udinese and Watford may also have played a part in the move, it was Ekong’s decision to leave I Bianconeri.

Speaking on why he signed for Watford, Ekong revealed it was because of his desire to play in the English Premier League.

CHECK IT OUT:  Onuachu Puts More Pressure On Rohr

“I believe in the project for Watford to get back into the Premier League,” Ekong told BBC Sport Africa.

“It’s always been my dream to play in the Premier League, and Watford has given me the platform now to get there. Looking at the squad, I believe we have the quality to do it.”

Ekong’s dream is just like most players as the Premier League is a dream destination for most footballers. But to take a step below at the age of 27 leads to doubt.

The former Bursaspor defender is not the only Nigerian star that made a switch that is considered as a downgrade.

Both Ejuke and Dessers move to CSKA Moscow, and Genk respectively is a surprising one given their performances in the Dutch top-flight last season.

Dessers was the joint top scorer in the Eredivisie last season with 15 goals but was only good enough for a Genk side that finished seventh last season.

Ejuke was arguably Heerenveen’s best player and one of the best wingers in the Eredivisie, but it was shocking when he joined CSKA.

While there’s a lot of factors in player switching clubs, taking a step below has been a reoccurring thing among Nigerian players. The same can also be said about Oghenekaro Etebo, who recently joined Galatasaray in the Turkish top-flight.

The current Super Eagles team have just a few players in Europe’s top five leagues, and only just a handful play regularly.

CHECK IT OUT:  Wolves Fans React To Transfer Reports Linking Super Eagles Star To The Premier League Side

Alex Iwobi and Kelechi Iheanacho were once tipped to be the future of Nigerian football, but neither could even break into the starting lineup of Everton and Leicester City respectively.

Kelechi Nwakali was provided with many opportunities after his displays at the 2015 U-17 World Cup, but right now, he’s struggling at Huesca.

In the defence, only Semi Ajayi and Ola Aina play in one of the top five leagues, and that’s even for the newly promoted sides.

Kenneth Omeruo used to play in the Spanish top-flight, but he is currently plying his trade in the second division following Leganes relegation last season.

Right now, Victor Osimhen, Samuel Chukwueze, and Wilfred Ndidi before his injury are the only players we have playing for a supposedly top club in Europe.

In contrast, Senegal have the likes of Idrissa Gueye(PSG), Sadio Mane(Liverpool), Kalidou Koulibaly(Napoli) and Edouard Mendy, who just signed for Chelsea, all playing for top clubs.

Also, both Cote d’Ivoire and Algeria, who are below Nigeria in the FIFA rankings, have a decent number of players playing in Europe’s top five leagues.

Even though players from the French-speaking countries and North African region have better opportunities of playing in Europe compared to their English speaking counterparts, the difference in quality between the two areas cannot be ignored.

There’s a reason why clubs from these parts have dominated the CAF Champions League and Confederations Cup in recent seasons.

It should be noted that this is not a criticism of Super Eagles players abilities- after all this is a better team compared to the one before Gernot Rohr arrive.

However, you cannot be more than what you are. Rohr has improved the squad massively since he arrived, but it’s clear that the number of players at a top club and Europe’s top five leagues in the team shows the Super Eagles still lack quality.