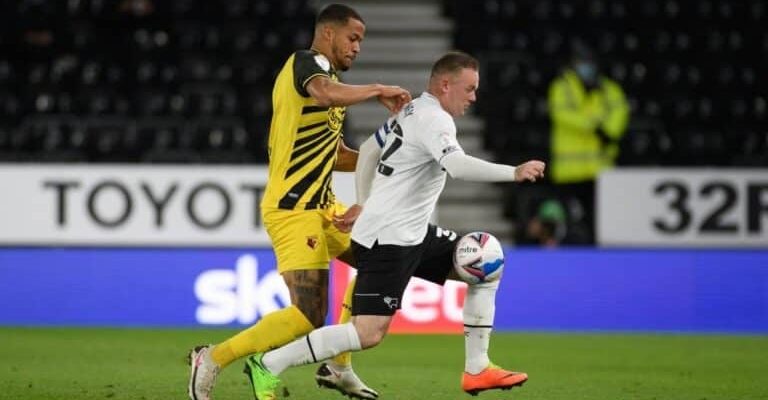 Nigerian defender William Troost-Ekong has revealed how he and other Watford mates were able to stop legendary forward Wayne Rooney from scoring when defeating Derby 1-0 during their Championship clash at Pride Park.

Troost-Ekong recently signed a five-year deal with Watford, after ending his two-year spell with Italian side Udinese.

The former Tottenham academy graduate featured for the Super Eagles last week in their 1-0 defeat to African champions Algeria in Austria but excused himself from the game against Tunisia four days later to make his league bow for Watford against Derby.

The 27-year-old centre-back did not disappoint as he marshalled the Hornets’ defence to keep a fourth clean sheet in five league matches in what is the club’s best run of defensive form in 32 years.

Rooney was one of the Rams’ most dangerous forwards, but Troost-Ekong, who had faced Lionel Messi and Neymar with the Super Eagles, silenced the England legend.

“Rooney was someone I watched growing up, and you have to make sure you don’t give him any chances around the box,” the former Udinese defender told Watford FC.

“I was surprised he missed the one late on, but I think we did well to keep him quiet and not give him any space.

“You try and shift him onto this left [foot], but I’ve seen him score with his left foot, too. We tried to make it as hard as possible for him and not let him face you up and have a shot at goal.

CHECK IT OUT:  Lola Omotayo speaks on COVID-19 attack on her household

“We did that quite well in the first half and in the second half, besides from that chance and the free-kick. You have to be careful with a quality player like that.”

Watford currently sit in fifth on the Championship table and boast ten points, having won five and drawn one of their five games played so far this term.