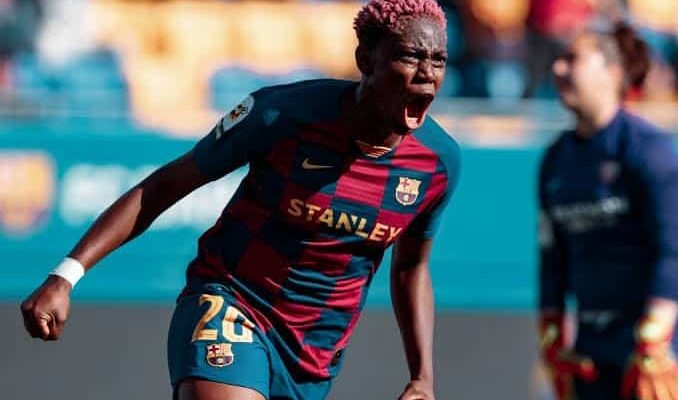 The four-time African footballer of the year was among the goalscorers as Barcelona claimed a 5-0 away win at the Ciudad Deportiva Luis de Sol.

Luis Cortes’ ladies have been perfect this month, playing five and winning five, scoring 27 goals and conceding none.

It was more of the same at Betis, with Oshoala netting the game’s third in the 47t-minute after Caroline Hansen and Marona Caldentey had put the visitors two goals up.

Further goals from Jenna McCormick and Jenni Hermoso sealed another comfortable victory for the Spanish champions.

Oshoala’s strike is her second goal in as many matches, having found the back of the net in Barcelona’s 6-0 whipping of Sporting de Huelva last time out.

Simeon Nwankwo scored his third goal of the Serie A campaign on Saturday, but it could not lift Crotone to victory as Atalanta bagged all three points with a 2-1 win at the Stadio Ezio Scida.

The visitors ran to a two-goal within the first 38 minutes courtesy of a Luis Fernando Muriel brace, but Simy struck for Crotone just before the break.

It’s the 28-year-old forward’s third goal in six Serie A matches. Simy got his first goal of the season in the 4-1 defeat to Sassuolo in early October before finding the back of the net against champions Juventus the following week.

CHECK IT OUT:  WE WANT HIM! Bayern Munich Plot Move To Sign Leroy Sane