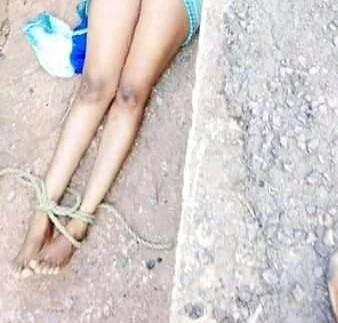 Posted By Udokabestluv On November 12th, 2020

IgbereTV reports that a yet-to-be identified young lady was found dead inside a drainage at Adikpi village, along Osumenyi/Akwuihedi road, Osumenyi in Nnewi South Local Government Area of Anambra.

The deceased, whose identity is yet to be ascertained, was found with her hands and legs tied with rope and her mouth gagged. There are also marks of violence on her neck.

Spokesperson of the State Police Command, Haruna Mohammed, who confirmed the incident on Wedneday, November 11, said efforts are being made to apprehend the perpetrators.

“On the 10/11/2020 at about 12pm, there was a report by a good Samaritan from Osumenyi in Nnewi South LGA that a girl whose name and address is yet to be ascertained, aged about 22years was seen lying lifeless inside a gutter along Osumenyi/Akwuihedi road Osumenyi with mark of violence on her neck, mouth was sealed with tape while her legs and hands were tied with rope,” he said.

“Scene was visited by Police operatives attached to Nnewi Area Command and victim was rushed to Visitation Hospital Osumenyi where she was confirmed dead by the doctor on duty. Corpse was photorgraphed and deposited at the same hospital morgue for autopsy and effort being intensified to ascertain circumstances surrounding the incident in order to apprehend perpetrators and bring them to book.” he added.

The photos were posted by the Special Assistant to the Local Government Chairman.

CHECK IT OUT:  Pretty Lady Who Was Set To Wed In October Crushed By Truck In Ajah (Photo)
Source:
https://igberetvnews.com/1371406/lady-found-dead-gutter-anambra-mouth-gagged-hands-legs-tied-graphic/