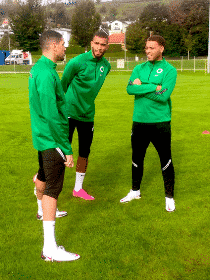 The Germany-based defender made his Super Eagles debut against the Leone stars last week, and he is looking to make more appearances for the 2013 African champions

Nigeria could only manage two disastrous draws against lowly Sierra Leone on November 13 and 17, but Hoffenheim star Kevin Akpoguma insists it was a proud moment for him and his career.

Akpoguma, a former German youth international, earned his first two official caps for Nigeria when the senior clashed twice consecutively against Sierra Leone, with the first leg a particularly horrendous outing for the Super Eagles.

The Gernot Rohr-tutored side ran to a four-goal lead inside the opening half-hour only to allow their visitors to stage a remarkable comeback to tie the Afcon qualifier at 4-all.

But Akpoguma maintains that despite the disappointing results and the tough pitch conditions, he felt and identified with the Nigerian spirit and enthusiasm and can’t wait to be a part of it when the continental qualifiers resume next year.

“It was a big experience, big difference because of course, we played as you said in Austria, so it was similar to how it was at Hoffenheim.

“But of course I had to prepare very well for the weather, for the pitch, it’s a different style of playing in Africa, and it was official games, you saw the pressure of what it’s like playing for something, the Africa Cup.

“The first game we started very well, but you see also the other side. I think for me to see the whole week was a very big experience. I think it’s good to see both sides, how it is to be successful in the first half, of course, we didn’t win, but I saw the enthusiasm and spirit of the country.

CHECK IT OUT:  We Will Get You Anywhere You Are – EFCC Boss Magu Tells Nigerian Looters Who Fled Abroad

“Also, like if you lose or just draw, it’s a disappointing result for Nigeria, but I think it’s good for the future to see both sides, and it will give me more experience for the next time. I’m looking forward to the next games in March.”

The Super Eagles remain on course to qualify for Cameroon 2021, with the three-time African champions still sat atop Group L of the Afcon qualifying series.

A win in any of Nigeria’s last two matches will see the senior team advance to the tournament proper.

Rohr led the team to a third-place finish at last year’s edition in Egypt.