This is my problem with President Buhari – Bishop Kukah drops another bombshell - NaijaCover.Com
Skip to content 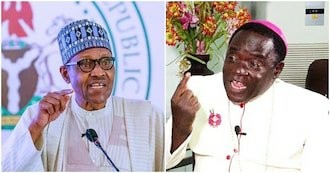 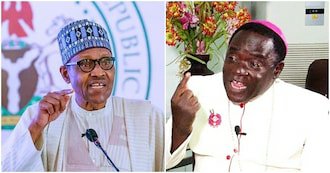 The bishop of Catholic Diocese of Sokoto, Reverend Matthew Hassan Kukah, has justified his Christmas message where he accused President Muhammadu Buhari of nepotism.

Kukah told reporters on Monday, December 28, that he does not have any ill feelings towards Buhari, but is unhappy with the way governance is currently being done, The Tribune reported.

The cleric said he was not bothered over various reactions trailing his Christmas message.

He stated that his criticism of the president was based on the standards of what is right and wrong and not because of any personal issue.

“Let me be clear, I don’t have a problem with President Buhari. I am unhappy with the way governance is being done. I don’t have to like the president and the president doesn’t have to like me as well.
“This is our country and we have to make it great. If my brother were the chairman of a local government, will that stop me from telling him what he does not do right?”
According to This Day, the bishop pointed out that his major concern is how to stop the killings and attacks that have been occurring in the country in the last few years.

He stated that he has no problem with Muslims, Christians or any other religion, pointing out that the problems he spoke against affect all Nigerians.

“To make it more interesting, a retired General from the North-West who is a Muslim has also released a statement on his handle to say all what I said is true.”

The post This is my problem with President Buhari – Bishop Kukah drops another bombshell appeared first on .

CHECK IT OUT:  Why Ex-Oyo Gov Ajimobi Should Be Probed – PDP