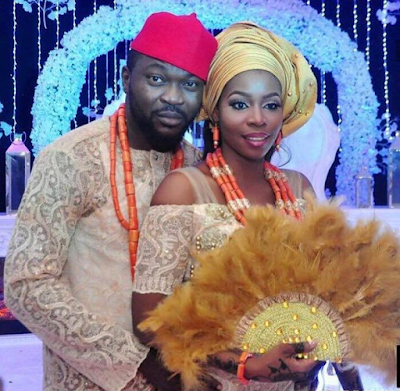 Nigerian comedian , Buchi, in an exclusive telephone chat with The Punch , has cleared the air on a viral video which showed his wife , Rukky Isede , being arrested by men of the Nigeria Police Force.

Based on some online reports it was alleged that the comedian ’s wife was arrested for assault and vandalism . In the video, the young lady can be seen forced inside the police vehicle.
It was alleged that she harassed the estate security personnel and vandalised items which the estate charged her about N 700, 000 . It was gathered that she and her husband refused to pay the money so the estate management cut their power supply till they pay for the damages but they reconnected it.

It was alleged that a general meeting was called to resolve the issued but it was to no avail which made the comedian leave the house . It was further alleged that the young lady, took some thugs to harass the chairman of the estate.

The police were invited and she was arrested . In the said video , the residents of the estate who filmed her arrest identified her as Buchi’ s wife.

Buchi said, “ I would not want to go into it but I will just want to say that all the allegations are lies. We had an altercation with the estate because one of the security men beat up my niece . My younger brother fought the guy and they fined us. I disagreed because we needed to go into the reason for the altercation ; the security people harassed a tenant . They should not fine me because my younger brother defended my niece as I was not around when it happened . They fined us and I said that is not right . ”

CHECK IT OUT:  Doctor Lands In Hot Soup For Doing This To A Patient Without His Permission (Photo)

The humour merchant said that he decided to take the matter to court and after informing the estate association , they cut his power supply.

“ I initiated legal action and I informed the estate that I will take the matter to court. They said that since I was taking the estate to court , they will not provide power. I am not around and I had already told my wife not to make any trouble with them . Due to the COVID – 19 pandemic courts are not sitting so we cannot institute any action . I have a ten -year – old daughter and the heat was getting unbearable for her so my wife went to demand that they should give restore the power, that was part of the video online , this led her to go to the estate association president ’ s house , ” he said.

The comedian said that the main problem arose when his wife went to estate association president ’s house to demand that power be restored in the house . He claimed that the residents of the association ganged up against his wife, and destroyed her vehicle.

“ I think what really caused the problem was that she went to the estate association president ’s house and she said that she and her children were not going to leave until they restored the power . That was what caused everything . In the process of trying to eject her, they got into an altercation . My younger brother had to step in. The president cried foul to the members of the association and it turned to a mob and they started manhandling my wife.

CHECK IT OUT:  Rumours Over!! Man United Boss Solskjaer Speaks On Sanchez’s Future At Man United

They went ahead to destroy her car . I have video evidence . I am asking , what did her car do to them ? Currently , I am not around but I have been making calls . They took her to the police station but I was able to get her out last night . My wife never embarrassed me in public . She did not sleep at the police station. It was a gang up against my wife , ” Buchi said.

The post Comedian Buchi Explains Why His Wife Was Arrested By The Police, Says It Was A Gang Up appeared first on .