Dennis Scores First Goal For Cologne But It Was A Night Of Mixed Fortune - NaijaCover.Com
Skip to content 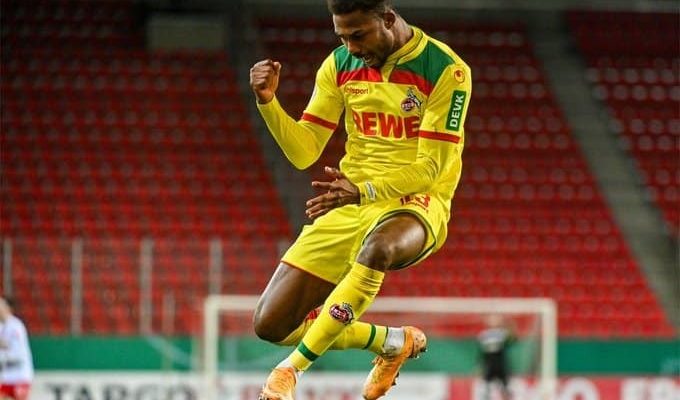 Emmanuel Dennis scored his first goal on his second appearance for Cologne, but it was not enough as the Billy Goats were dumped out of the German Cup Jahn Regensburg via penalties.

Dennis joined Cologne from Club Brugge in the January transfer window on a loan deal for the remainder of the season.

The 22-year-old made a winning debut last Sunday as Cologne beat Arminia Bielefeld 3-1 in the German top-flight.

He then opened his account on Wednesday night in the DFB Pokal Cup, although Cologne were knocked out on penalties.

The Nigerian international scored Cologne’s second goal to put them two goals ahead inside the opening 30 minutes.

However, Jahn Regensburg staged a remarkable comeback by scoring twice in the last ten minutes of the first half.

Neither team could find the winner in the second-half and extra-time, so the game went into penalties, which the home side won 4-3.

Another Nigerian striker, Toluwalase Arokodare, also featured for Cologne in the encounter. Arokodare came on for his compatriot in the 96th minute of the game.

He was one of the penalty takers for Cologne, which he successfully converted.

CHECK IT OUT:  “Thank you for giving me a beautiful baby” – Teddy A writes an emotional note to Bambam