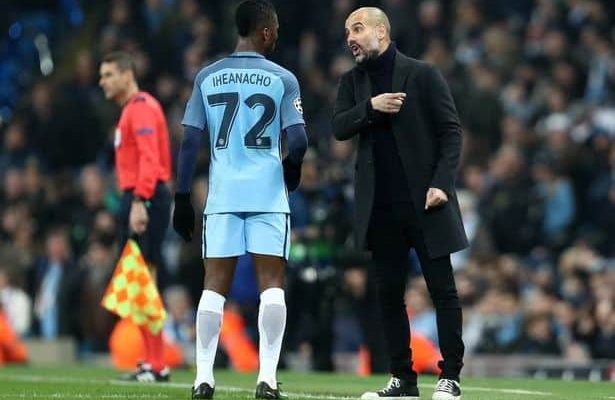 Manchester City manager Pep Guardiola has praised Kelechi Iheanacho’s quality but insists he was right to let him go.

The Nigerian international is a man in form and was named the Premier League player for the month of March after scoring five times in three games for Leicester City.

However, before his time with the Foxes, he was once with the Citizens. Iheanacho joined City in 2014, a year after he starred for Nigeria’s Golden Eaglets at FIFA U-17 World Cup at the United Arab Emirates.

The 24-year-old enjoyed an ample amount of playing time under former City manager Manuel Pellegrini. But it all changed when Guardiola arrived in 2016.

Although he played a season under the former Barcelona manager, Iheanacho left the Etihad in 2017 to join Leicester City.

And ahead of City’s trip to the King Power Stadium stadium, Guardiola has revealed why he had to let the in-form forward leave.

The former Bayern Munich manager revealed it would’ve been difficult for Iheanacho to compete with Gabriel Jesus and Sergio Aguero.

“The quality was there, he was a young player here, and I believe in that moment with Gabriel and Sergio, we didn’t have much space, Guardiola said per Manchester Evening News.

Nonetheless, Guardiola is pleased to see Iheanacho thriving and fulfilling his potential.

He is a fantastic person, we had a good relationship, and I’m delighted it’s going well lately.

CHECK IT OUT:  JUST IN!!! PDP Appoints New Party Leader For The North

“He’s playing for the injured Maddison, and he links really well with the midfield, and he’s good in behind, he’s fast and in the final third, he has the right tempo, he is so clear in front of the goal.”

Iheanacho will hope to continue his good form when Leicester welcome City to the King Power Stadium on Saturday evening.