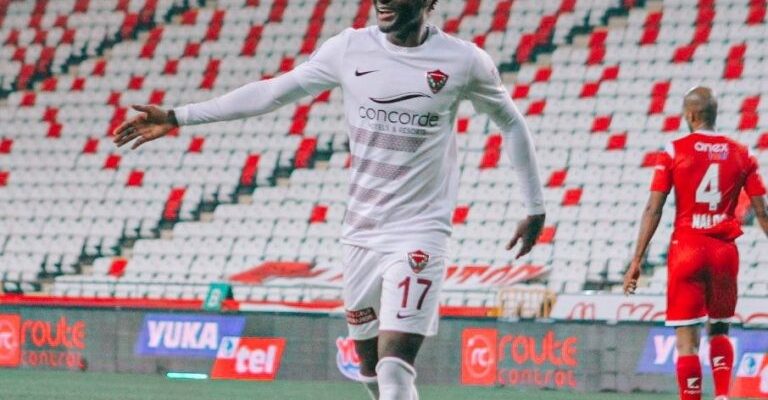 Super Eagles stars Henry Onyekuru and Oghenekaro Etebo featured from the start for Galatasaray. Still, it was little known David Akintola, who powered ten-man Hatayspor to a comprehensive 3-0 victory at the Antakya Ataturk Stadium.

Flying winger Akintola has been one of Hatayspor’s most productive stars this campaign, and the 21-year-old showed he could mix it well with the big boys when he set up Mame Biram Diouf for the game’s opener after just 21 minutes.

Ruben Ribeiro added another on the half-hour mark before Diouf bagged his brace in the second half as the home side struck a blow at Galatasaray’s title hopes.

Etebo, who scored in Nigeria’s 3-0 defeat of Lesotho on Tuesday, was on the pitch the entire duration of the game but couldn’t halt his side’s free fall.

His compatriot Onyekuru, on the other hand, was replaced in the 81st minute, moments after the referee reduced Hatayspor to ten men with the sending off of Strahil Popov.

Elsewhere at the FNB Stadium in Johannesburg, two out-of-favour Super Eagles stars were on parade as nine-man Kaizer Chiefs overcame Morocco’s Wydad Casablanca 1-0 to boost their chances of qualifying for the next round of the CAF Champions League.

Akpeyi, snubbed for Nigeria’s final two Afcon qualifying games in March, lasted only 40 minutes as he was shown a red card for a professional foul.

The visitors also took off Babatunde and replaced him with Hamza Asrir at the break as they look to capitalise on their one-man advantage.

But it was the Amakhosi that broke the deadlock against the run of play shortly after the interval when Bernard Parker tapped home a simple finish.

And despite striker Samir Nurkovic’s dismissal late on for a second booking, it was Babatunde and co who returned to Morocco empty-handed.

The 28-year-old was one of Nigeria’s standout stars at the 2014 FIFA World Cup hosted by Brazil.

After missing out on the action in Nigeria’s scoreless draw in their opening group game against Asian representative Iraq, Babatunde impressed for 75 minutes as Osaze Odemwingie’s first-half strike handed the Super Eagles a 1-0 win over Serbia and Montenegro in the second match.

The former Volyn midfielder then supplied Ahmed Musa’s opening strike in Nigeria’s 3-2 defeat to a Lionel Messi-inspired Argentina. Musa also scored the Super Eagles’ second goal on the day to become the first Nigerian to net a brace at the World Cup.

But he has not been invited to the national team in six years.