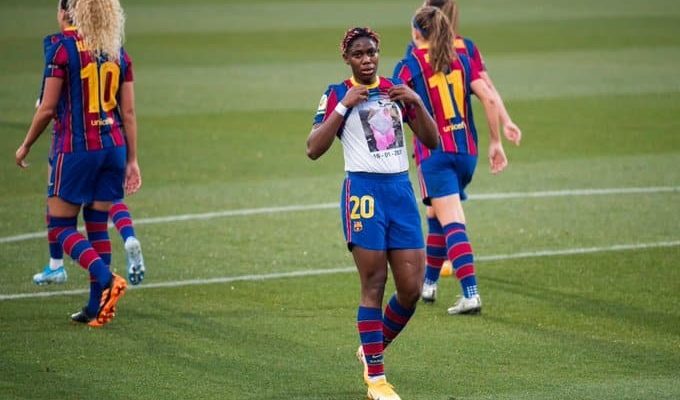 The creation of the Super League by 12 major clubs in Europe has dominated the headlines over the last few days, and the Barcelona Femeni star has weighed in on the issue

Super Falcons star Asisat Oshoala has urged FIFA and UEFA to apply the same energy used to tackle the Super League in the fight against racism and equality.

However, football fans, ex-players, UEFA and FIFA all kicked against the move, accusing the 12 clubs involved of greed.

UEFA and FIFA released a statement on Monday saying they are against it, and the clubs could be banned from their domestic leagues and champions league.

The news continued to generate strong reactions from not just football fans but also governments. And just last night, the six Premier League clubs involved in the decision bowed to pressure and announced their decision to withdraw from the Super League.

Reacting to the news, Oshoala said UEFA and FIFA only acted swiftly because the financial implications could be damaging.

Also Read: What The European Super League Means For Nigerian Players And The Super Eagles

The former Liverpool star took to her Twitter to share her opinion on the matter. She also added that it’s important the same action be taken to tackle racism and equality.

The ENERGY is always different when people aren’t directly affected. y’all have this much energy but decided to keep it cuz u think those issues aren’t IMPORTANT ENOUGH or IT’S NOT WORTH IT ?
No joint statements,No bans but of course as soon as MONEY is involved,d story changes.

Meanwhile, Real Madrid, Juventus, Barcelona and Atletico Madrid are still yet to release a statement announcing their withdrawal from the Super League.

CHECK IT OUT:  Another Lady Murdered In A Hotel In Port-Harcourt

However, the two Milan clubs (Inter and AC) have announced their withdrawal from the controversial competition.