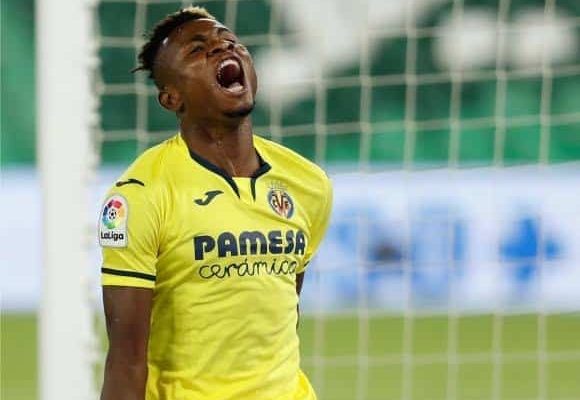 Villarreal are the Europa League champions after beating Manchester United 11-10 on penalties after fulltime ended 1-1 in the final played inside the Polsat Plus Arena, Gdansk on Wednesday evening.

Samuel Chukwueze missed the entire game due to injury, despite joining in some of Villarreal’s training sessions days before the match.

One of the Yellow Submarines’ most influential players in the competition this term, Chukwueze had contributed one goal and five assists before he picked up the injury in his side’s semifinal clash against Arsenal.

And he was aiming to be only the second Nigerian international – after Alex Iwobi in 2019 – to score in the Europa League final.

But Villarreal handled Chukwueze’s absence well enough in the early stages and took the lead through Gerard Moreno after only half an hour of football, as the Spanish forward steered home a Dani Parejo free-kick from close range.

But United grew into the game steadily, and Uruguayan striker Edison Cavani rewarded the Red Devils’ industry when he smashed home the equaliser from close range ten minutes into the second half.

That Cavani strike later sent the Europa League final to extra time as Villarreal and Manchester United could not be separated after 90 minutes.

In what is the first Europa League final to go to extra-time since 2014, when Emery’s Sevilla eventually won on penalties versus Benfica