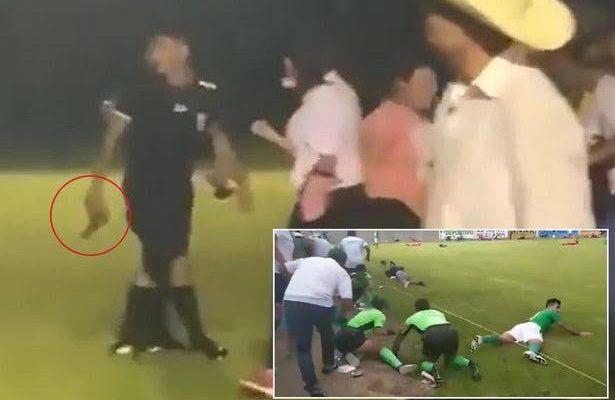 A referee pulled out a gun to restore order during an amateur football match in Honduras after upsetting fans with a controversial penalty call, strolling around the centre circle with the weapon. 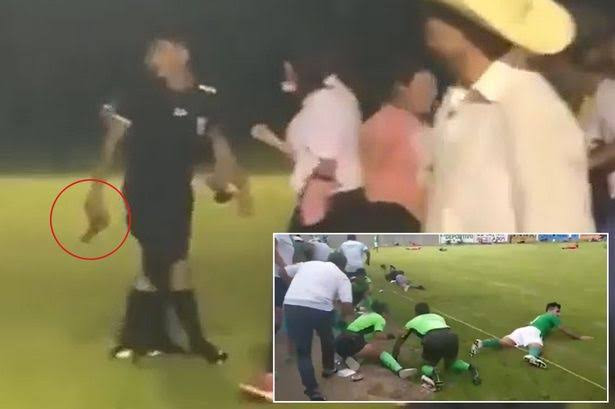 The extraordinary moment the match official strolled around the centre circle with the weapon in his hand was filmed by fans who kept a safe distance amid the confusion.

The tense scene occurred during an amateur match in the western Honduran town of La Jigua.

Local reports said the unnamed ref brandished the pistol to protect himself from angry supporters who thought he should have awarded their side a penalty.

A relative is said to have handed him the weapon at the end of the match as he was jeered by the furious fans.

Shots could be heard during the home-made video, although it was unclear where they had come from.

One supporter was overheard insulting the ref by calling him a son of a b****, although he appeared to make a wise decision by staying in the stands.

There were no reports of any injuries as a result of the standoff.

The match official has not been identified and it is not yet clear if he will face any disciplinary action over his radical decision.

Earlier this month three people were killed and one injured during a firefight at a football match in the Mexican state of Guanajuato.

The shocking incident occurred during the second half of an amateur match between Santa Ana del Conde and Zona Piel.

A lone gunman armed with an AK-47 rifle, who fled the scene in a white car and is still being hunted by police, is said to have responsible.

CHECK IT OUT:  Ighalo Names Three Man United Players That Helped Him

The reason behind the shooting has not been revealed.