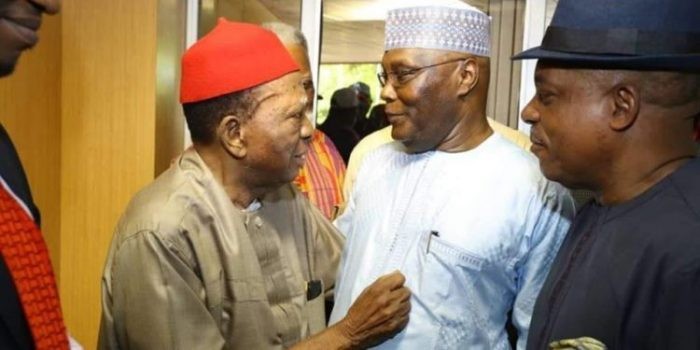 Former Vice President Atiku Abubakar and his Peoples Democratic Party had eggs on their faces Friday as the theory of an INEC server, the pillar of their cases against President Muhammadu Buhari collapsed like a house built with sand.

That was the loud and clear message at the Presidential Election Tribunal in Abuja as Atiku closed his case and the court adjourned till 29 July for the defence to open its case.

There is certainly no need for the defence to open any case. There is nothing to defend as Atiku and the PDP had failed convincingly to prove the existence of any other result apart from the one declared by INEC on 27 February, with Buhari beating Atiku by about four million votes. Buhari got 15.1 million votes, Atiku got 11.2million votes.

With the anti-climax of Friday, Atiku’s case, all the past weeks had become a riveting theater of the absurd and entertainment. He and his team of legal luminaries and witnesses had wasted everyone’s time, pushing a specious thesis that does not exist. A server, now where is the server?

CHECK IT OUT:  Police Arrest 8 Suspects Over Okah’s Death

On the last day of providing irrefutable proof that he won the presidential election and beat President Muhammadu Buhari, Atiku’s two ‘star witnesses’ were a study in high comedy.

Both the uncertified ‘expert’ from Kenya, David Ayu Nyango Njoga and former aviation minister Osita Chidoka miserably failed to establish the existence of the server allegedly used by the Independent National Electoral Commission for the transmission of election results during the last general elections.

Incredibly the two star witnesses, who claimed they had information that INEC used a server, got their information from anonymous sources, possibly in a beer parlour or the dark web of whistleblowing.

Both witnesses stammered when challenged to authenticate their claims.

Chidoka ought to have known better. He was a witness to the manual collation of the presidential election result at the International Conference Centre in Abuja after the election on 23 February.

How did he come about the INEC server theory?

He confirmed to the Presidential Election Tribunal that the results were collated nationwide manually, and still added idiotically that he learnt the result of the election was “transmitted by INEC electronically to the INEC server.”

He collapsed under cross-examination by lawyer to INEC, Yunus Usman (SAN). When asked if he witnessed the transmission, Chidoka said he was not present when the alleged electronic transmission was done.

On whether he has ever seen the said server or known its location, the witness said: “I have not seen the server, but before the election and during collation, the INEC Chairman talked about the existence of server.”

Was Chidoka oblivious of the fact that INEC chairman Mahmood Yakubu ruled out electronic transmission of results even before we went to the polls?

When asked to provide the server address, Chidoka said the one he referred to was the same address provided by the anonymous whistleblower.

Chidoka said he witnessed the manual collation of election results at the national level and was told by his party’s agents that collation was also manual at the state, ward and polling unit levels.

Under cross-examination by lawyer to President Muhammadu Buhari, Dr. Alex Izinyon (SAN), Chidoka admitted that he did not witness all he claimed happened during the election.

A WEBSITE WAS CREATED CLAIMING TO HAVE THE RESULT

Njoga, who claimed to be an Information Technology (ICT) expert from Kenya, said he was engaged by the petitioners to analyse results of the election as obtained from INEC server and stored in a website => https://www.factsdontlieng.com

When asked whether INEC owns the website, the witness said no, but that the data it contains are from INEC server.

Njoga, claimed that the website is owned by an INEC official, who provided the election result figures. When asked to name the said INEC official, the witness said: “My lord, the INEC official is anonymous and I do not know him.”

Under cross-examination by the leader of Buhari’s legal team, Chief Wole Olanipekun (SAN), Njoka said the website was created on March 12, 2019. When reminded that the presidential election held on February 23 and the results released before March 12, the witness went blank.

CHECK IT OUT:  “My Great Grandfather Is The First Nigerian To Ever Release An Album” – Femi Kuti

The resounding collapse of Atiku’s INEC server may have knocked the bottom out of his case at the tribunal.

His other redeeming planks remain whether he has proven substantially election irregularities in the states.

It remains to be seen from 29 July, whether this is also not another illusion.