How We Abducted Chibok Girls In 2014 — Boko Haram Commanders - NaijaCover.Com
Skip to content 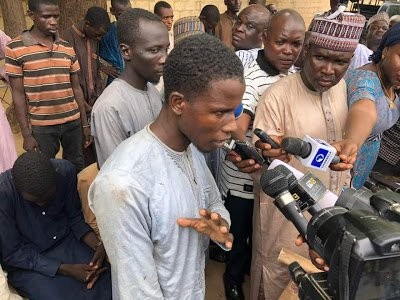 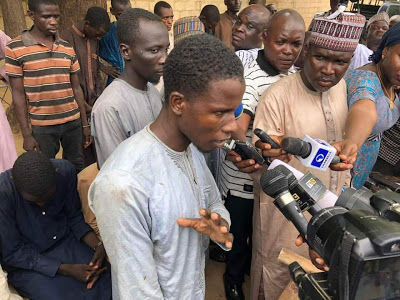 Following the recent arrest of 22 members and commanders of the Boko Haram, by operatives of the Inspector General of Police Special Intelligence Response Team, IRT, Led by DCP Abba Kyari shocking revelations have emerged on the murderous activities of the sect.

Cross section of the suspects

It was gathered that three commanders of the Civilian Joint Task Force, an outfit created by the Borno State Government, to assist the Nigeria Military in trailing and arresting members of the sect, were among those arrested by the IRT, for giving out operational information of the military to members of the sect.

Eight other suspects also confessed during interrogations that they were part of the group that carried out the April 2014, kidnap of over 200 schoolgirls from a government secondary school, in Chibok area of Borno State.

When Vanguard interviewed the suspects, some of the commanders, foot soldiers and informants narrated their roles and the various tasks executed for the group.

Maita Alhaji Modu alias Abu, a 20-year-old Boko Haram commander, Though he said he has not gone to School and not sure of his real age, Native of Bama Local Government of Borno State, who was a farmer and had no formal education confessed that he took an active part in the 2014 kidnap of Chibok schoolgirls and he was equally responsible for moving young girls who were used for suicide bombings from Sambisa Forest into Maiduguri Town.

He said as a commander, he had been fighting for the sect since 2011 and assisted the group in taking over several towns, villages. He said he also participated in ambush attacks across the Northeastern states of Nigeria and some parts of Niger, Chad and Cameroon. He disclosed that the leadership of the group usually paid each fighter the sum of N30,000 after each attack.

Narrating how the group carried out the April 2014 Chibok school girls attack, he said; “one of our commanders, who received direct orders from our leader, Abubakar Shekau, Bana Chungori, called out over 100 of us and we all assembled at the Sambisa Forest.

He told us that our leader, Shekau had ordered that we should all go to Chibok Local Government and kidnap some school girls at the school. We couldn’t ask questions, because it was a direct order from Shekau and we all mounted our trucks.

We had five big military trucks, three Toyota Hilux vans and two Isuzu pickup trucks. We left Sambisa Forest around 5pm that evening and arrived the school around 10pm.

We surrounded the school when we arrived and when we were certain that there would be no resistance, Chungori gave orders that we should all go in and we found the girls running in fear. We kidnapped many of them and took them away in our trucks.

When we got to the entrance of the Sambisa Forest, Chungori asked all the foot soldiers and other lower commanders including me to leave the truck because he was to take the girls to Shekau, whose camp was deep inside the forest.

I didn’t see the girls again because I was not very close to Shekau, but I was paid the sum of N30,000 on the day of the kidnapping and I was also given the sum of N60,000 after a set of ransom was paid for the release of the girls.”